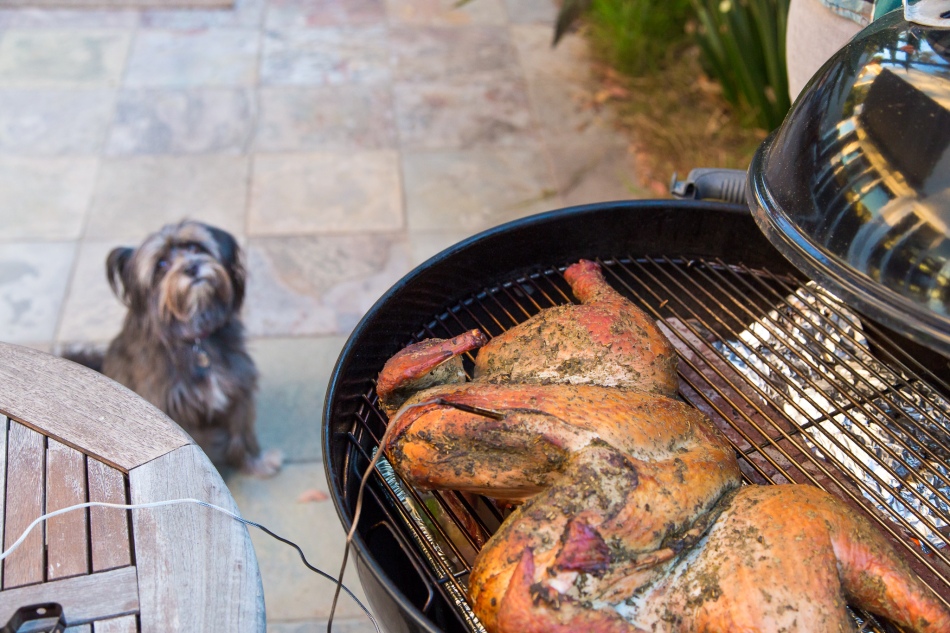 Thanksgiving is right around the corner, and we’ve had turkey on the brain for a while now. Confession: we’ve always been so focused on the delicious side dishes at Thanksgiving, we almost always neglect the turkey. We decided that this year would be different, and that we would do our research to ensure the turkey we make on the big day is something worth giving thanks for!

Philippe’s family has been grilling their Thanksgiving turkey for years now, and they’re on to something. Not only is it a great way to free up the kitchen and oven space to make everything else required for the feast (I see you, pumpkin pie), it’s also the best way to get a seriously flavorful and juicy bird when done right.

Here’s the method we followed, which delivered some deliciously smoky, flavorful meat with a nice crispy skin.

We started with a 14 lb turkey (on the smaller side) so that it would cook more evenly (and since we are two people attempting to consume this thing). We bought our frozen turkey at Whole Foods, where they have two good all-natural, free-range options – one of which is organic. We bought the turkey on a Wednesday, and it was thawed enough by Saturday to cook.

To begin cooking, we first removed the giblets including the neck and placed those in the gravy pan. Everything but the liver went in there too (which our dog Elizabeth enjoyed after we cooked it over the stove.)

Since the turkey wasn’t pre-brined or salted, we salted it the night before directly on the skin (see recipe instructions here).

Philippe then spatchcocked the turkey by removing the spine and snapping the wishbone. This allows the turkey to lay flat for more even cooking and better all-over crispiness.

Using the powdered “Simon and Garfunkel” rub mixed with a little water, we rubbed the spices under and over the skin and into the crevices, then let it sit for a few hours in the fridge. 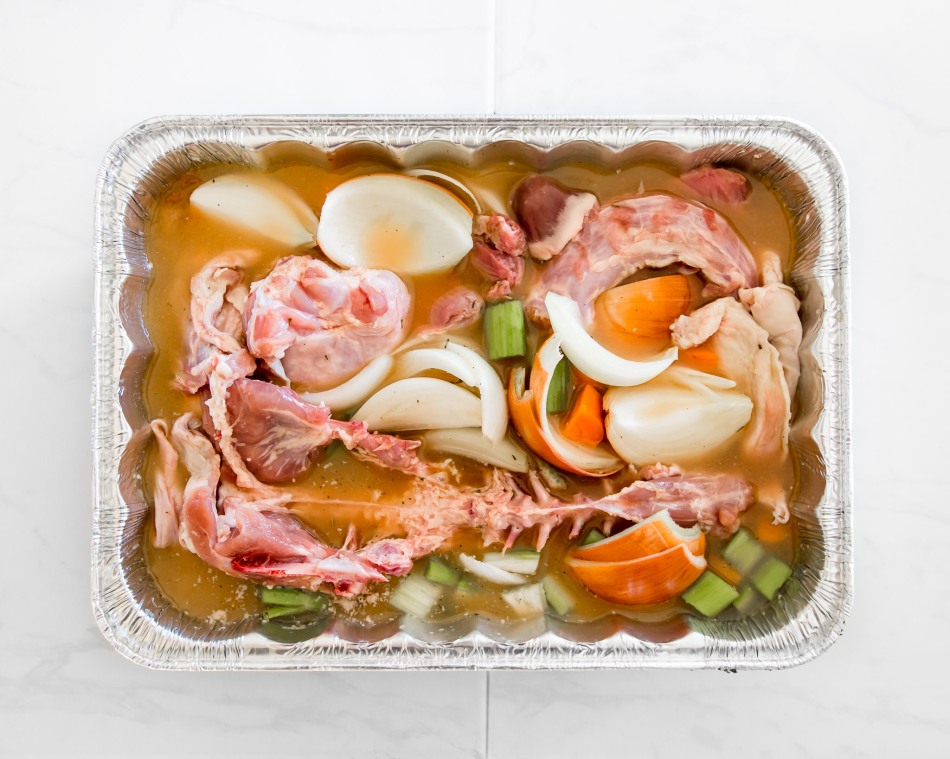 While that was marinating, we chopped some carrots, celery, and onions (leaving the skin on) and added those to the gravy pan with a bottle of white wine, water, and broth until the pan was mostly full.

Next, we set up the Weber Kettle for indirect cooking (coals on the opposite side of the bird) and adjusted the charcoal & vents to hold 325-350 degrees using the digital temperature probes.

The gravy tray went below the clean grate and the turkey was then placed directly on the grate away from the direct heat. We also threw some apple wood on the coals for a light smoke flavor and finally, stuck a 2nd temperature probe into the deepest part of the turkey breast.

We left the turkey for an hour without peeking, just adjusting the vents as needed to maintain the temperature. After an hour, we checked the color (a nice golden brown) and added some more coals. 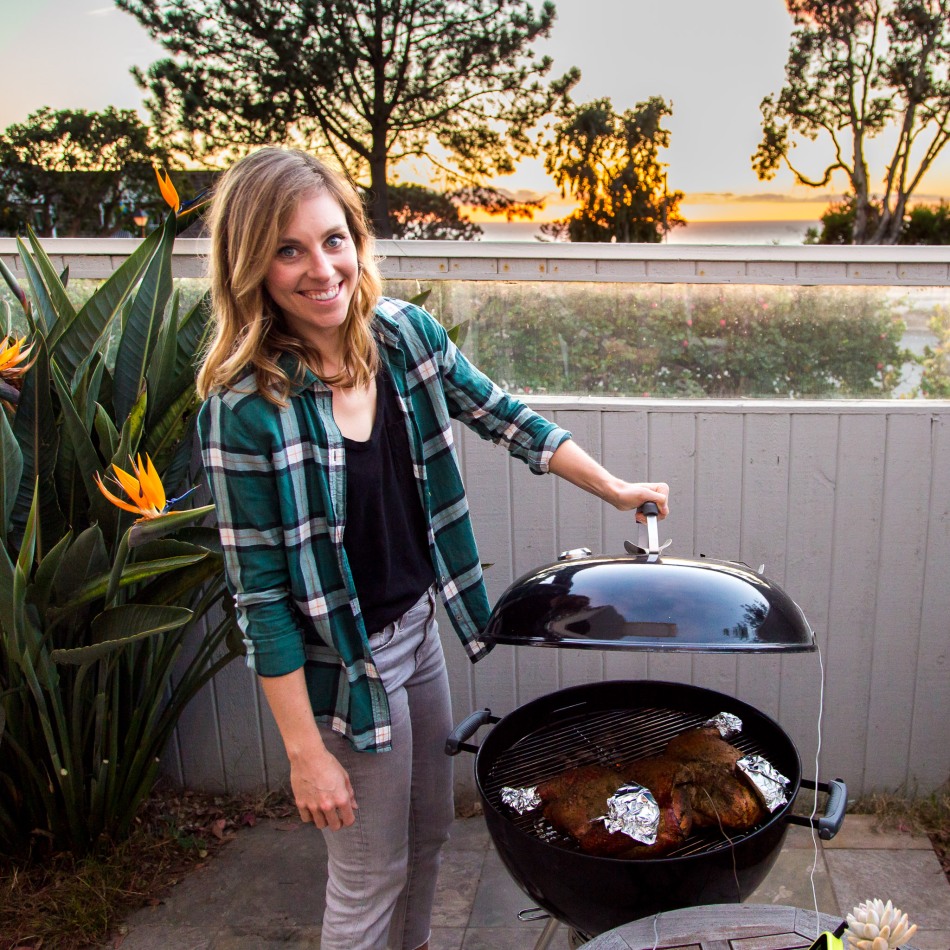 After about 3-3.5 hours, the breast probe was reading 160 degrees and the thighs slightly higher (which was intentional because the darker meat should cook a bit more).  The turkey then came off the grill and the gravy came inside.

Once the turkey was off the grill, we started carving it up right away! Another bonus of spatchcocking is the turkey lays flat, making it easier to carve. Cut off all dark meat first, then remove the entire turkey breasts before slicing across the grain. 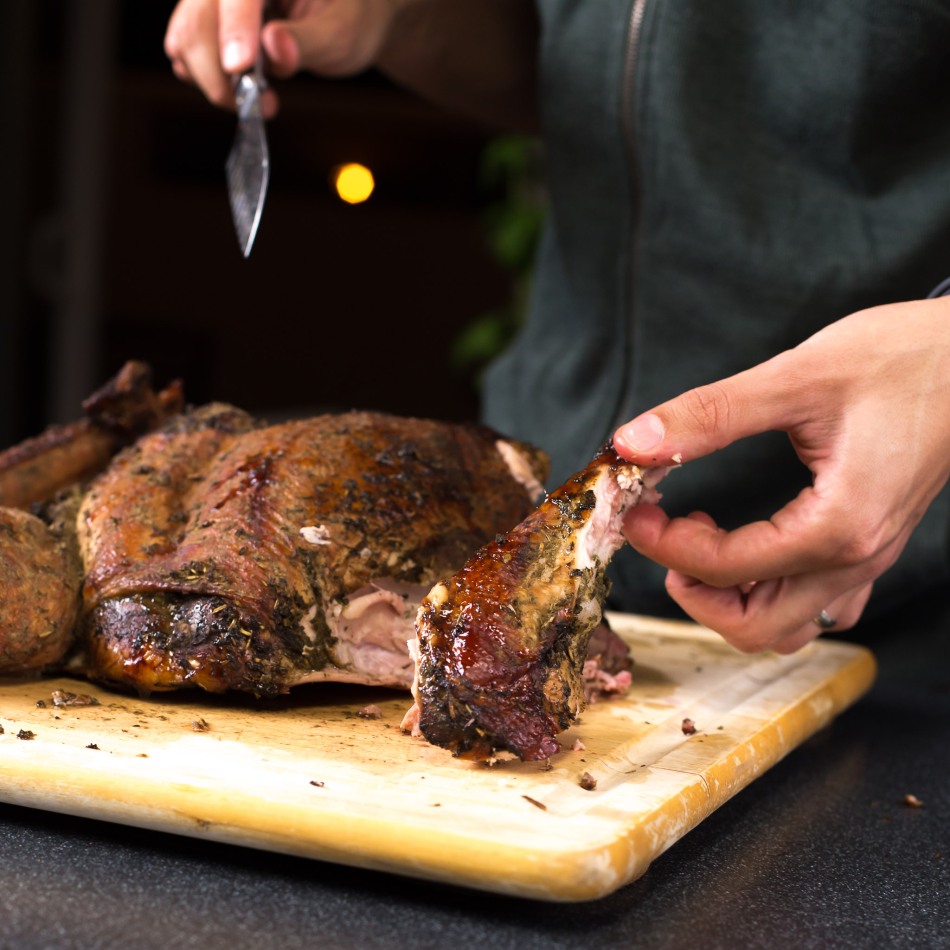 Now for the gravy, and the bone broth!

We removed the tray from the grill along with the turkey and used a large soup ladle to add it to a big pot. 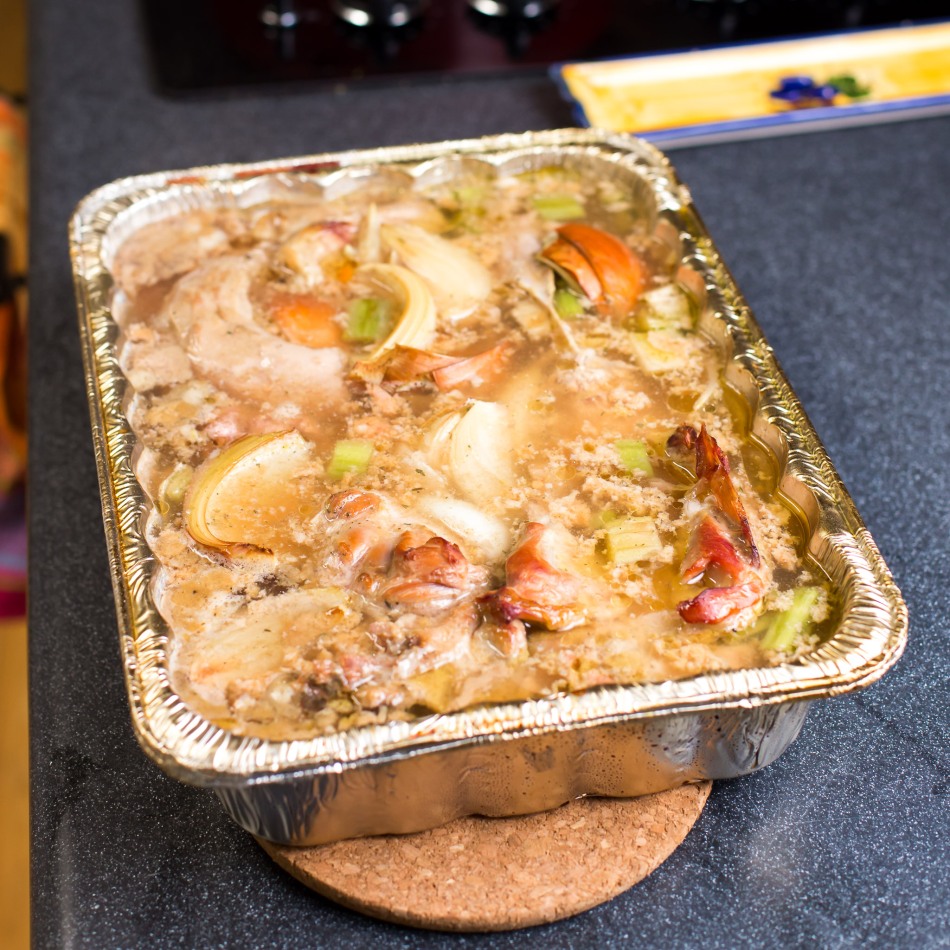 We then brought the pot to a simmer and skimmed the fat from the top. To serve, we spooned the gravy (which is really just a broth) over the turkey, which made it extra flavorful and juicy. If you like a thicker broth, you can always spoon some out, add a little flour, and make a more classic gravy sauce.

We then continued to allow the broth to simmer on low over the stove for the next 48 hours. Luckily, we have an electric oven so we didn’t have to worry about leaving an open flame while we were sleeping or at work. Otherwise, this may be a better weekend project. 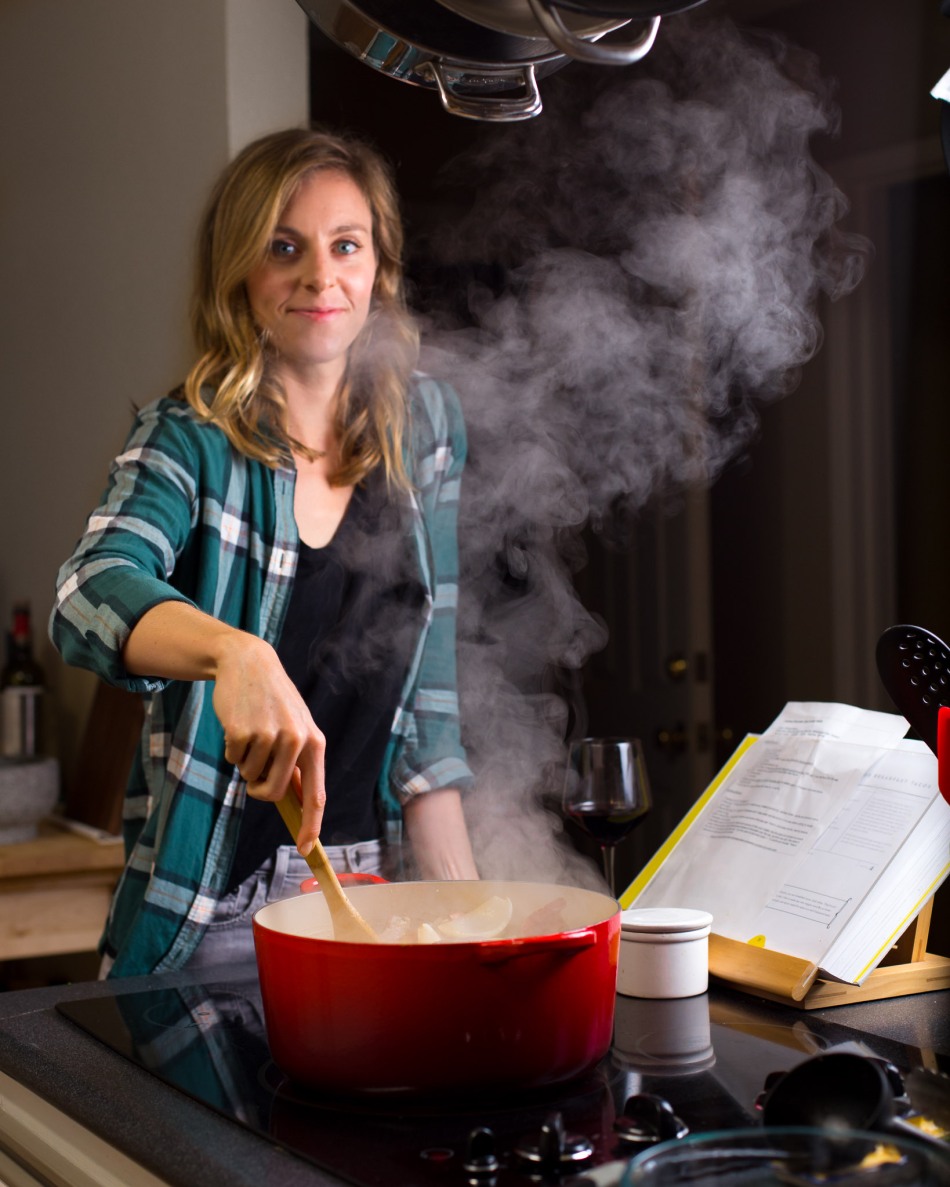 The bone broth came out with the uniquely smoky flavor of the turkey which we loved. We strained it once it was done cooking, and immediately placed it in the fridge with a few cubes of ice to cool it quickly. Warm bone broth can actually attract bacteria once it stops cooking, so it’s good to bring down the temperature fast. After a few hours, we removed more fat from the top and stored it in an airtight container which should keep for about 2 weeks.

We used the broth later in the week for soups, and drank it straight up as well. Bone broth is incredibly healing for your gut and is loaded with nutrients that you really can’t get through any other foods. We highly recommend taking the chance to use your leftover Thanksgiving turkey to make some!