After the ribs extravaganza of Memorial Day weekend, we opted for a vegetarian meal for our final family dinner in D.C. Since we had been reading Ottolenghi’s Plenty and Plenty More from cover to cover over the past few days, we had flagged many vegetable recipes to choose from. (It’s seriously amazing the number of varied plant-based dishes in these two books). But after much deliberation, we decided to go with this potato tatin, which is essentially an “upside down” french tart, in which the potatoes are caramelized with a little sugar at the bottom of the pan, then flipped over when the dish is served. It is a dish that can truly be served at any meal and would be great option for brunch.

Preheat the oven to 250°F. Halve the tomatoes and place them skin-side down on a baking-sheet. Drizzle over some olive oil and sprinkle with salt and pepper. Place in the oven to dry for 45 minutes.

Meanwhile, cook the potatoes in boiling salted water for 25 minutes. Drain and let cool. Trim a bit off the top and bottom of each potato, then cut into ¾ inch thick discs.

Sauté the onion with the oil and some salt for 10 minutes, or until golden brown.

Once you’ve prepared all the vegetables, brush a 8½ inch cake tin with oil and line the bottom with a circle of baking-parchment.

In a small pan cook the sugar and butter on a high heat, stirring constantly with a wooden spoon, to get a semi-dark caramel. Pour the caramel carefully into the cake tin and tilt it to spread the caramel evenly over the bottom.

Pick the oregano leaves, tear and scatter on the caramel. Lay the potato slices close together, cut-side down, on the bottom of the tin. Gently press the onion and tomatoes into the gaps and sprinkle generously with salt and pepper. Spread the slices of goat’s cheese evenly over the potatoes.

Cut a puff-pastry disc that is 1in larger in diameter than the tin. Lay the pastry lid over the tart filling and gently tuck the edges down around the potatoes inside the tin.
(At this stage you can chill the tart for up to 24 hours.)

Preheat the oven to 400°F. Bake the tart for 25 minutes, then reduce the temperature to 350°F/gas mark 4 and continue baking for 15 minutes, or until the pastry is thoroughly cooked.

Remove from the oven and let settle for two minutes only. Hold an inverted plate firmly on top of the tin and carefully but briskly turn them over together, then lift off the tin. Serve the tart hot or warm.

We had originally planned on making this fig salad to go with the tart, but couldn’t find figs anywhere (they were not quite in season yet – more of a June appearance in grocery stores). So we ended up making our own salad with grilled nectarines, arugula, pecans, bacon and feta cheese. I think this would be just as good without grilling the fruit, but the guys wanted to use the grill again so we did…

Start by grilling the nectarine halves (if doing so) by heating a grill to high. You’ll only place them on the grill long enough to see grill marks – about a minute or two with the cut side down.

Meanwhile, cook 2 slices of bacon on the stove until crispy and set aside to let cool.

In a large salad bowl, combine the olive oil, balsamic vinegar, pomegranate molasses, salt and pepper, and whisk to combine. Then add the arugula, crumbled feta, pecans, and crumbled bacon pieces and toss. Add the nectarines on top and serve immediately. 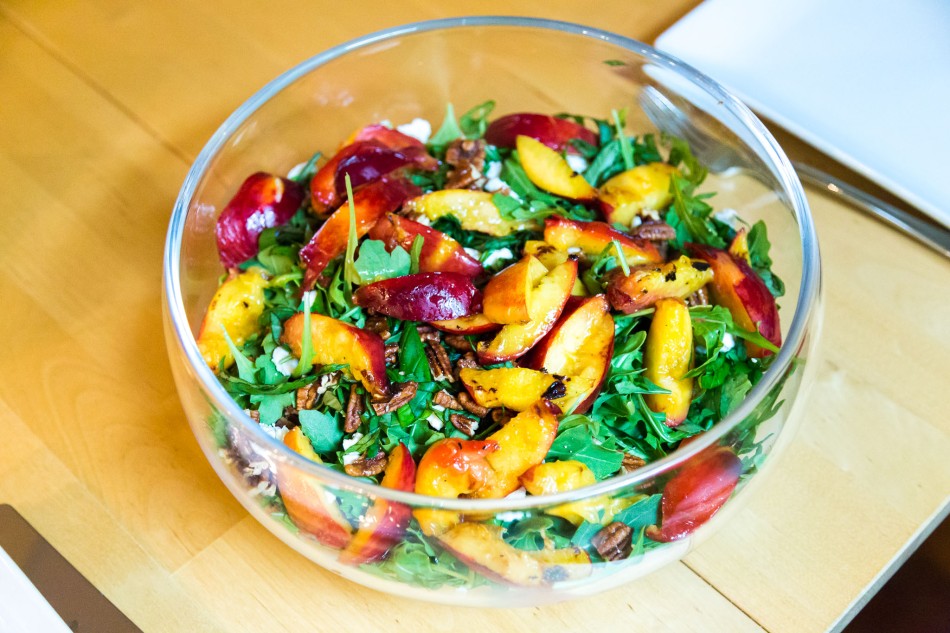 We still had a lot of nectarines left over after making the salad, so decided to keep the theme going for dessert too. We had made Ina Garten’s raspberry rhubarb crostata the night before (recipe linked in our last post), and had enough crust from that recipe to make another one. This time instead of raspberries and rhubarb, we used 3-4 sliced nectarines and 1 cup of quartered fresh strawberries for the filling, but otherwise followed the same recipe.

This version was a little but sweeter, but we liked it even better than the raspberry version.