We had a great trip to the East Coast last week, visiting a total of 4 cities to attend a wedding, stay with family, and even snuck in a work trip. It was a lot of travel, but we got to eat some amazing food along the way, trying new restaurants and cooking from our family’s kitchens. For the last leg of our trip, we were in Washington, D.C. visiting Philippe’s sister, brother-in-law, and adorable 2-year old. Since we were there over Memorial Day, we were inspired to grill an all-American feast and decided that there isn’t anything more American than BBQ Baby Back Ribs.

Philippe has been doing a lot of reading on (the science of) grilling in this book and website and was dying to try out our new learnings on our brother-in-law’s full size Weber grill. So we packed up the whole crew, made a trip to Costco, and bought a 3 pack of ribs. For 4.5 humans that’s a lot of ribs, but based on how tasty they were, we didn’t find it too difficult to work our way through half that amount for dinner, then making another dent by preparing BBQ sandwiches for lunch the next day.

We made some homemade BBQ sauce to go with the ribs (game changer) and for sides we prepared a slightly un-authentic take on potato salad with a pesto base. We also roasted some carrots and served them with a yogurt tahini sauce.

Although you may have assumed all that would be enough, it wouldn’t be a proper feast without a Memorial Day themed dessert!  Claire baked Ina Garten’s Strawberry Rhubarb crostata which looked a mess but tasted amazing. It was so good we made another version the next night with nectarines and strawberries which may have been even better. Links to all recipes below. 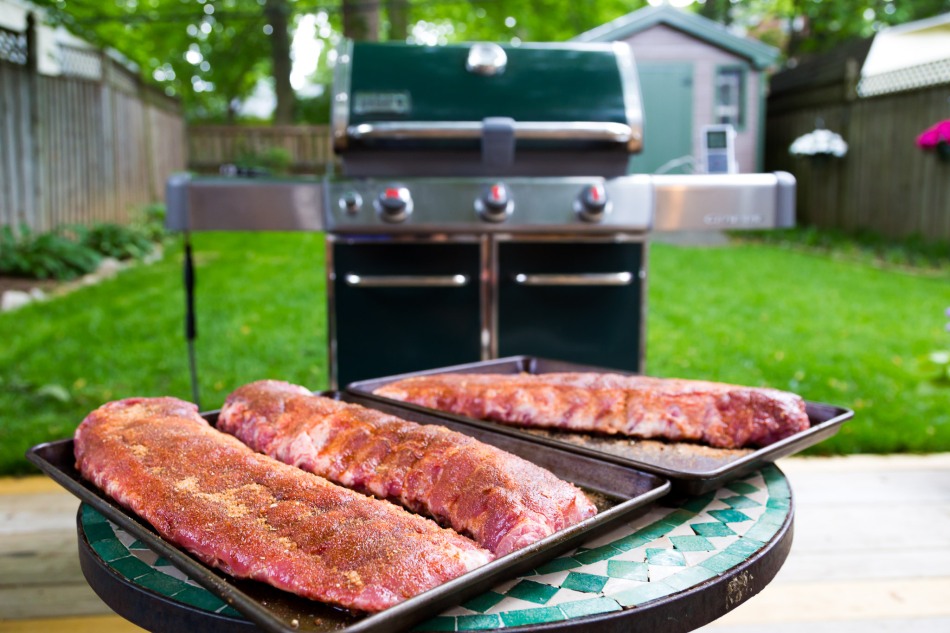 To make the ribs, we started by mixing together a dry rub called Memphis Dust to generously coat the ten pounds of meat. 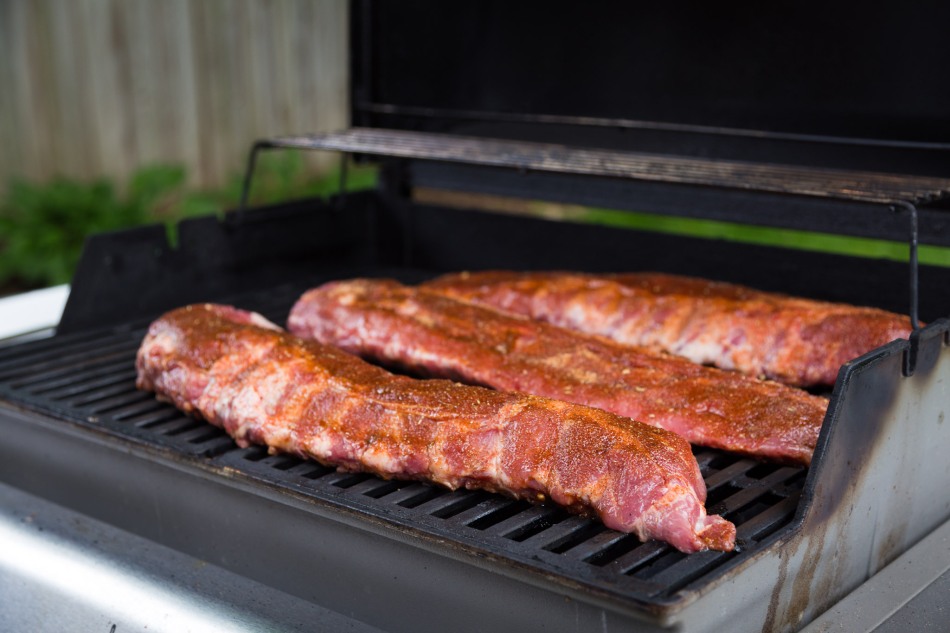 Since we’d never made ribs before, we based the cooking process off of The Last Meal Ribs which is apparently “the recipe for making the best barbecue ribs you ever tasted.”

Our brother-in-law’s Weber grill was set up for “low and slow” indirect cooking at 225 degrees F with water pans and a leave-in digital thermometer to monitor the grill’s temperature. We smoked the ribs for about four hours using hickory wood (otherwise you might as well just put them in the oven).

Also a fun fact that we learned: soaking your wood chips in water before grilling is a waste of time – so you can go ahead and skip that step.

Once the meat was on the grill, we made the Kansas City Classic BBQ sauce on the stove, and spread it over the ribs when they reached the right temperature. The ribs then went back on the grill over high heat to caramelize the sauce….we could already tell these would be amazing. 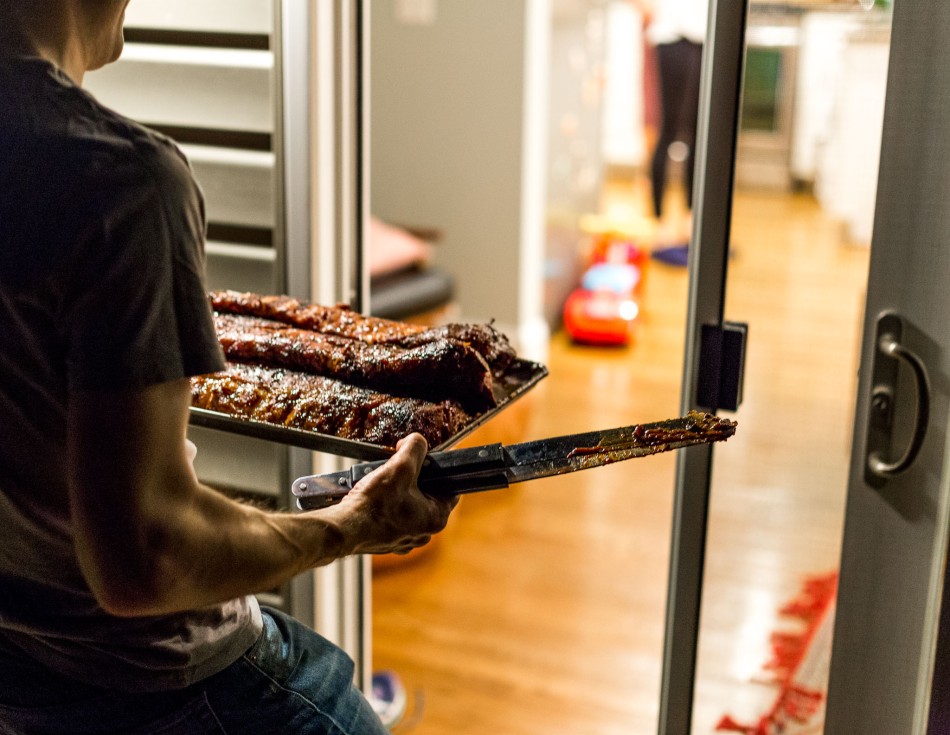 It was getting late and we were hungry, but it was finally time to eat.

We sliced a full rack and served it at the table with extra BBQ sauce on the side, pairing the ribs with a good Pinot or Pint based on personal preference.

If the pictures don’t sell you, the taste would have. Between big bites and finger licking grunts, there were quiet mumbles of “best ribs I’ve ever had”, “wow”, “here come the meat sweats.” Several did not eat meat for days after this meal. Others made delicious BBQ rib sandwiches on french baguette for lunch the next day. The combination of the ribs, dry rub, and homemade BBQ sauce was truly unlike anything we’ve eaten before.

The pesto potato salad and roasted carrots were also amazing. We ended up almost doubling the amount of potatoes the recipe called for since there was a bit of a pesto overload going on. Here’s the recipe with the tweaks that we made:

1. In a medium saucepan, cover the quail eggs with cold water. Bring the water to a boil and simmer the eggs for 3 minutes for hard-boiled eggs (or about 30 seconds for soft-boiled eggs). Run the eggs under cold water until cool, then peel and set aside.

2. Bring a large saucepan of water to a boil and cook the potatoes until they are soft but not falling apart, about 20 minutes.

3. Meanwhile, in a blender or food processor, combine the basil with the parsley, Parmesan, pine nuts and garlic and blend until combined. Add the olive oil and pulse until a runny pesto forms. Transfer the pesto to a large bowl.

4. Drain the potatoes and cut them in half as soon as they’re cool enough to touch. (They will absorb more flavor when they’re hot.) Toss the potatoes with the pesto, peas, mint and vinegar until combined. Season to taste with salt and pepper.

5. Cut the eggs in half and gently fold them into the salad. Garnish with chopped parsley and serve immediately or at room temperature.

And here’s the recipe for the roasted carrots, from Yotam Ottolenghi’s book “Plenty More,” which we are planning to add to our collection ASAP.

Then we ate this strawberry rhubarb crostata for dessert. Trust us when we say that Ina knows what’s up with dessert. Something fruity was just what we needed after all the meat!

1 comment on “Last Meal Baby Back Ribs, sides, and a Strawberry Rhubarb Crostata”